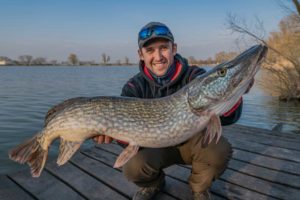 Dead bait is one of the most effective baits for pike fishing, especially during the cold season. This makes a lot of sense if you look at it from the point of view of the pike: during the winter they are not as active as in the summer, which is why a dead fish is a perfect opportunity for a good meal without having to exert themselves.

But you can also catch pike on dead bait all year round, and so it’s always worth setting up a rod or two with dead bait. And the great thing about this method is that it tends to catch bigger pike, and is allowed on most fisheries (in contrast to live bait).

Recently, a friend of mine from Florida came over for a visit, and I decided to show him how we fish for pike on this side of the big pond. Robert Ceran is the founder of Sportfishing Buddy, and is an avid pike angler himself (though he calls them “northern pikes” in the US).

Robert was more than thrilled to see how we catch pike here, and we had a great fishing session on a cold and grey day in January, catching 5 decent Pike between us on dead bait (the biggest one weighing 19lb).

Below are the most important tips and tricks that will help you catch more pike with dead bait.

Use the right gear

Dead bait fishing for pike requires stronger gear than most anglers think. There are several reasons for this. First of all, pike can grow very big, and it’s common to hook bigger fish with this method, so you should use fishing tackle that’s sufficiently strong to land them. Let’s admit it, we’re all hoping to catch that monster pike that hardly fits in the net, and so we should be prepared for that eventuality by using a rod and reel setup that’s strong enough for the job.

Secondly, you’re probably going to be using bigger baits and heavier running leads than for other types of fishing, and you want to use a rod with sufficient backbone to throw these heavy rigs. Your rod should also be longer than 10 feet (and ideally around 12 feet), as this will help to cast your dead bait farther, which can help to reach areas that hold more fish.

Finally, it’s very common to get your dead bait snagged on rocks or sunken trees, which is why I like to spool 55 lb test braided line, or even stronger. This line is strong enough to bend open a treble hook, which means you can get your rig back in most cases.

If you’re based in London and want to apply some of these tips, take a look at the top 10 pike fishing spots in London.

Test many different kinds of dead bait for pike
While pike can be partial to almost any kind of dead bait, on some days you’ll get zero bites on some types of baitfish, while another type of fish performs extremely well. That’s why it’s important to try out different species, to find out what works best on your fishery.

You may also find that the most commonly used baitfish stop working after a while since the pike learns to avoid them. When that happens, you need to change things up, and find a new baitfish species that produce bites.

The great thing about using dead bait is that you can usually get a wide variety of species and sizes. You can either catch them yourself, buy them fresh from the fishmonger, or buy frozen fish from a well-stocked tackle shop.

Some of the best fish to use as dead bait for pike are:

Smelt are by far the most popular dead bait among pike anglers, and for good reason, as they tend to outperform all other types of dead bait. They have an unusual scent that resembles the smell of a cucumber, and for some reason pike seems to find that extremely attractive. While we’re on the topic of scent: oily fish like mackerel and herring can also work very well (though I’ve found they work best when they’re fresh, which isn’t always easy to obtain).

If you want to try this out in Yorkshire, the best place to start is by checking our list of the top 10 pike fishing spots in Yorkshire.

Among the most common species you can catch yourself are roach and perch, which can both work well. Since dead bait fishing is often most productive in winter, you can stock up on bait fish during the summer, and keep them in your freezer until the winter season. Keep in mind that some fisheries don’t allow the use of freshwater fish, in order to avoid the spread of diseases, so make sure you check the rules for your lake or reservoir first.

If you’re fishing on a lake where trout are stocked regularly, these can make a killer dead bait for pike. This is because farmed trout are easy to catch for pike, and thus become one of their favorite foods.

When I go pike fishing, I like to take at least 3 or 4 different types of dead bait along, so I can test what works best on that particular lake, and on that particular day. In addition, I also test various methods of modifying the bait (see below).

Baitfish modifications that will make your bait more attractive to pike

As already mentioned above, if many anglers use dead bait in your fishery, the pike start to avoid them after a while. But there are a few tricks you can use to make your dead bait stand out from the others, which can trigger bites when nothing else works. The most well known technique is to inject air or oil into the baitfish, which makes it float above the bottom, where it’s more easily visible for any pike passing by.

If you want to inject air into your baitfish, you’ll need to use a plastic syringe and needle (but do this with great caution, so you don’t harm yourself in the process). This only works when you’re using whole fish, as the air gets trapped inside the body cavity of the fish (making it float underwater). Obviously this isn’t possible if you’re using a cut fish.

In addition to air, you can also inject scents into the baitfish, and there are quite a wide range of different options available on the market, some of them specifically developed for pike dead baits. You can even inject a combination of air plus scent into the body cavity, which can make your baitfish even more attractive.

Finally, you can also use food colouring to “paint” your dead bait with various colours. The most commonly used colours are red and yellow, and they are usually readily available in tackle shops. Some of the commercially available ones actually combine colour with scents, to increase the attractive effect even more.

If you’re having a hard time finding the right locations to try out these tips, take a look at our article on the top 10 pike fishing spots in Essex.